National Credit Card Reduction Day is March 21st – a “holiday” you probably won’t see any cards for at Hallmark. Nonetheless, we think the goal of urging people to pay down their credit card debt and keep more of their own money is a good one.

Here’s a quick example using some of those averages. If a household has $5,700 in credit card debt that charges 16% interest on the balance (the average interest rate on a credit card) and a standard minimum payment calculation it would take them over 25 years to pay off that credit card if they just pay the minimums(either 2% of the balance, or $25 whichever is greater). They would pay almost $10,000 in interest on top of the $5,700 they owed!

Now let’s take the same household and make their payment a fixed $150 per month. That’s not that much more than the minimum. But they’d pay off their credit card in under 5 years with only $2,300 in interest paid – saving almost $7,700. Visa and MasterCard and American Express are doing just fine – you don’t need to pay them more than you have to. Minimums are set to keep you paying them interest – they’re not the “right” amount to pay. 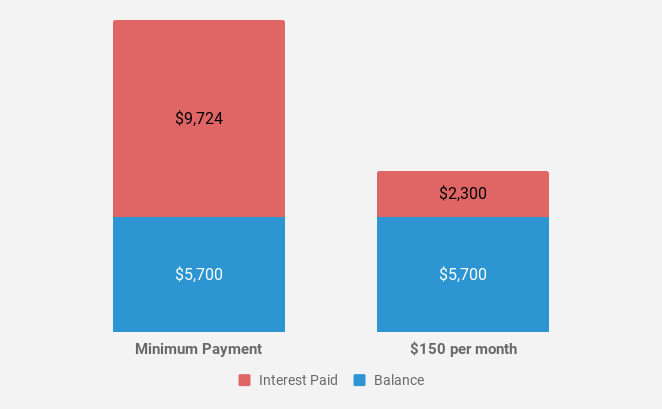 How do you know which card to start with? BrightDime recommends starting with the card with the highest interest rate because it will cost you less in interest in the long run (sometimes called the “debt avalanche” technique.) But if you’re someone who needs small wins and accomplishments along the way, you could start with the smallest balance and work your way up (“debt snowball.”) Either way you’re saving yourself money. The important thing is to get started; so pick a card, either the highest interest rate or lowest balance, and start paying more than just the minimum.